Inspired by the obelisk, Oblisco Capitale would be the world’s tallest tower if it was ever built. Designed by Idia for Egypt's new capital, the concept embodies the nation's hopes for the future. 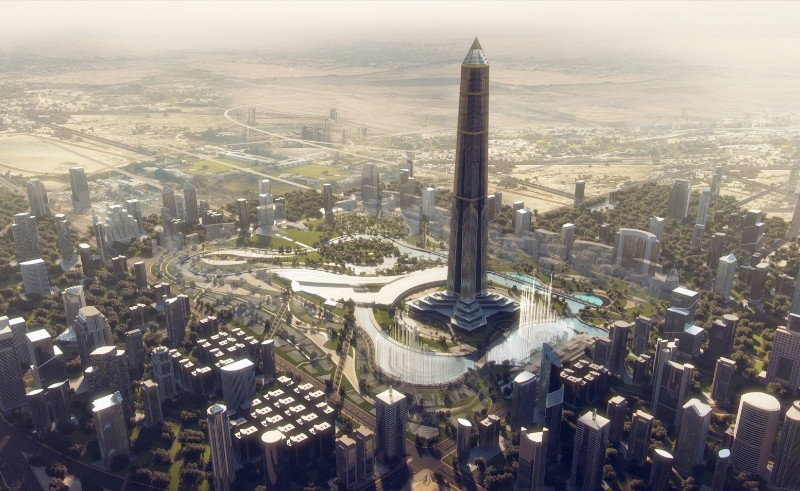 Tekhenu, the Ancient Egyptian word for ‘pierce the sky’, is what Egyptians called the obelisks. Oblisco Capitale, a concept designed by Idia, certainly lives up to that moniker, soaring at 1,080 metres high. Yes, a full kilometre - it would be the world’s tallest skyscraper, taller than Burj Khalifa and Cairo Tower combined. When it comes to dreaming big, this design concept certainly aims for the stars.

Following the announcement of the New Administrative Capital, Idia was approached by El Nasr Housing and Development, a public sector company that wanted to develop a project that symbolised Egypt’s vision of a progressive future. The result was a tower that emulates the geometric proportions of obelisks, mimics the Egyptian Lotus aesthetic with an art deco twist, and above all, epitomizes the sustainable goals of Egypt’s future.

“Our aspiration is to follow the footsteps of our ancestors, the greatest architects, the Pharaohs,” Chief Designer Ehab Mokhtar tells #SceneHome. Designed into six segments, it definitely matches the monumentality of Ancient Egypt. At its base is a podium that would host ballrooms, conference halls, fine diners and a mall, with designated entrances for each function of an interior embroidered with gold and supported decoratively by marble columns.

Moving upwards, four hotels taking up 96 stories are separated by a helipad from the corporate offices. Juxtaposing 29 residential floors are two observatory levels that offer ethereal views. Higher, things start to get exclusive as VIP residences are topped by 10 ‘presidential guest palace’ levels, bringing the grand total to a knee-buckling 236 stories.

“Egyptians master science, math and architecture, leaving us with a wealth of inspiring heritage,” Mokhtar adds, as key features of the sky piercer showcase its sustainable design. Golden Lotus-inspired louvers rotate as the sun moves throughout the day, making for a dynamic interior experience while providing shade and reducing peak heat and, consequently, cooling requirements. Its solid-to-void ratio ensures that the interior maintains its visual connections to the outside environment. Oblisco’s sustainability doesn’t end there; photovoltaic glass is used on its southern façade, turning natural light into solar energy and electricity. Brightly facilitating its self-sustenance.

“We wanted to create a green, sustainable community,” Mokhtar says of the tower’s surrounding developments. Continuing the spirit of designing analogies to Egypt, the Nile is depicted through lagoons that create waterfronts to parks, cultural centres, design and business districts, cycling and walking pathways and a golf course. And of course, there is a dancing fountain. Oblisco Capitale presents an image of what life could be like in Egypt, sometime around the next decade.

You may have seen the Oblisco Capitale on promotion campaigns of the new capital, commonly associated with Egypt’s 2030 vision. Yet despite its alluring design, it hasn’t entered the tendering and construction phases yet. On the other hand, the Iconic Tower has been under construction for the past couple of years, soon to become Africa’s tallest tower. For now, Oblisco Capitale remains a vision. One that sends a clear message; Egypt is moving forwards. Or rather, upwards.